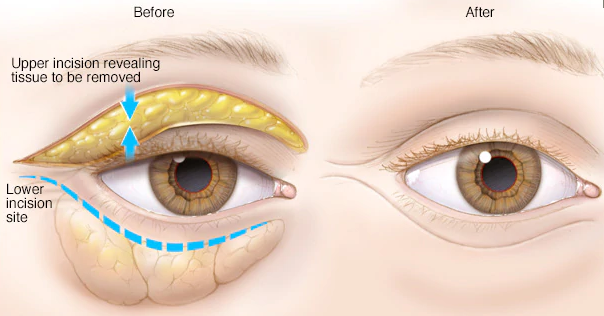 Are you tired of having soggy eyes? The not-so-perfect eyes that everyone seems to be judging you for. The imperfection that you think will never go away because eyes are sensitive, and it is not good to undergo any surgical procedures there. Though none of these might be true, there is still that evil voice in your head that thinks it could be made better.

And maybe that evil voice is right as well. Eyes might be a sensitive part, but that does not mean there are no safe surgical procedures to enhance its looks. Many kinds of surgeries could be performed and the most famous one being blepharoplasty or eyelid surgery.

What Makes You Want The Surgery?

Everyone knows that surgeries are just harmful procedures most of the time. No one can escape from the list of uncomfortable aftereffects. But sometimes the situation is such that the surgical procedure cannot be avoided either. That is the case faced by people with droopy eyes.

The main cause of droopy eyes is aging. Due to aging, the eyelids tend to stretch, and the excess muscle holding it in place weakens. This weakness allows the eyelids to droop over. But it is important to know that age is not the only factor. If this kind of eye runs in your family, then you might want to speed up your surgical procedure.

Also, all the sagging or drooping of the eyelids can reduce your vision. This often irritates the eyes, and they tend to strain more with the given situation. Other than facial appearance, this is the other reason for which the surgery is preferred.

What Happens During The Surgery?

Like any other surgery, there is a numbing medication given to you. Along with this, there is also another relaxant given to relax you during the procedure.

If you only have one lid, then the surgery is done only on that. The skin is cut, and the excess fat or muscle is removed. The fat is removed or redistributed along the area. If you are performing the surgery for both eyelids, then the eye surgeon will work on the upper eyelid. For the lower eyelid, the cut is made right below the eyelashes.

Though eyelid surgery may seem simple to many, the surgeons need to perform it carefully. Even if the cut is being made along the lines of your facial skin, any disturbance can cause an effect otherwise.

What Happens After The Surgery?

Immediately after the eyelid surgery, you are moved to a room for observations. There are many effects that you will face while being under observation. You are only discharged when all these effects subside, and you are in perfect condition again.

One of the most common effects faced by the patients undergoing the surgery is watery eyes. Due to the surgery being done very close to the eye, it immediately starts watering. But this is completely normal after the surgery, and it shouldn’t be a cause of panic.

Swelling is also common, and so is puffing of the eyelids. They are also the effects that would initially wear out within an hour. The only long-lasting effect would be the blurry vision. The disruption in vision is due to the lubricating ointment that is applied before the surgery to smoothen the process.

You should avoid straining your eyes and your face. Any movement on the face can increase the swelling of your eyelids. Also, try to hold on to an icepack on your eyes to reduce the swelling and the pain that follows.

Printer For Your Home And Office

The turntable is not just music equipment it is a whole experience. You can play vinyl records on it to show your passion for music. Multiple brands are available for the musical turntables are Crosley is one of them. It...
Technology

In this article, we are going to discuss everything related to Lumify eye drops. What are the side effects of these Lumify eye drops, how to use them, and much more? So without any further time wasting let’s get towards...