Family law issues are their area of expertise. The majority of family law...
HomeBusinessWhat are the...

What are the merits of Cardano vs. Ethereum 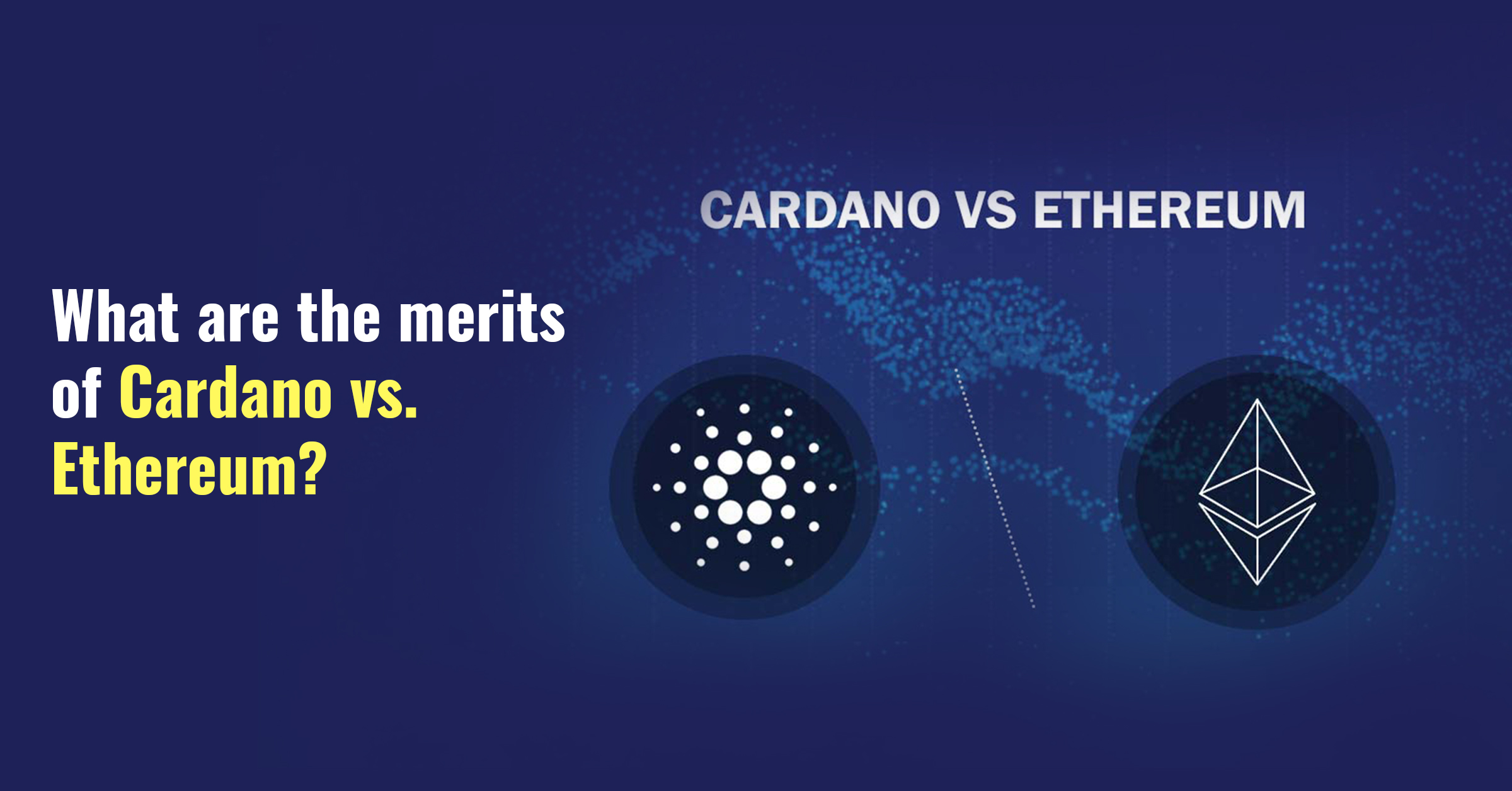 If you’ve heard of Cardano and Ethereum but aren’t sure how they function, keep reading. Or perhaps you want to know which protocol has the most advanced technology? In any case, we’ve got you covered in this Cardano versus Ethereum comparison!

What is a Smart Contract Platform?

The term “smart contract platform” refers to a system that allows users to build smart contracts on top of it. Although smart contracts appear to be something that only attorneys would be interested in, they are actually the foundation for a variety of technologies.

Smart contracts are the only way to create a variety of intriguing protocols. Both Ethereum and Cardano are smart contract platforms, although they have distinct advantages and disadvantages that we’ll consider in this article.

Since its inception in 2015, Ethereum has fared admirably. It is presently the world’s second most popular cryptocurrency, has become the first blockchain technology project to host smart contract technology.

The majority of initial coin offers (ICOs), which are when new start-ups raise funds for blockchain projects, are held on the Ethereum platform. The Ethereum blockchain, which gives the Ether coin real-world value, is being used by an increasing number of dApps.

Other blockchains, on the other hand, are vying to dethrone Ethereum as the most popular smart contract platform, earning them the moniker “Ethereum killers.” One of these is Cardano, which claims to be developing the industry’s most advanced smart contract system.

Even though it was only created in late 2017, the Cardano currency has performed admirably. It was originally just worth $0.02 per coin, but just a few months later, in January 2018, it was worth $1.22! This resulted in a more than 6,000 percent gain in market capitalization, resulting in a total market capitalization of $32 billion.

Since then, its value has plummeted, just like the rest of the cryptocurrency business.

Several members of the community have expressed their dissatisfaction with the team’s slow pace in completing the development process. Instead of rushing, Cardano states that they want to take their time to guarantee that they produce the greatest product possible.

If you’re considering investing in Cardano and its ADA coin, keep in mind that the project is still a long way from realizing its vision of unlimited, quick, and free transactions. Despite the presence of some bright academics, scientists, and developers on the team, there is no certainty that the blockchain will be able to achieve its goals.

Certified Ethereum blockchain developers are in high demand. Getting an Ethereum certification is a great step to further in your career.

Vitalik Buterin, a young developer, founded Ethereum in 2015. It was the world’s first blockchain initiative to allow users to construct smart contracts. As a result, unlike Bitcoin, Ethereum is capable of far more than just financial transaction processing.

A smart contract, in its most basic form, allows people from all over the world to agree without the need for a trusted third party. Instead, pre-defined conditions are written into a coded smart contract, and when they are met, the smart contract delivers the funds automatically.

Cardano also has its own digital money, the ADA coin. The ADA token, like ETH, can be used to transfer and receive funds from one wallet to another.

Cardano’s overarching goal is to strike the optimal balance between serving the requirements of its users and those of regulators. This is crucial to the team because they believe that bitcoin will eventually be regulated in the same way that the financial services industry is.

Ethereum, as one of the most valuable cryptocurrencies in terms of market capitalization, offers many distinct advantages. To begin with, it has the most active developer community of any cryptocurrency. Ethereum has more developers working on it than Bitcoin!

The network effect is one of the most dependable ways to value a cryptocurrency. To put it another way, the more people who use a cryptocurrency, the more valuable it gets. The same may be said about social media and other technology such as phones and email.

Ethereum already has a large network impact and a lot of infrastructure behind it. The list goes on and on: decentralized derivatives, over a dozen stable coins, digital art marketplaces, decentralized financing systems, decentralized exchanges, and so on… Ethereum is already used by millions of people, making it even more probable that more users will join the network.

Unlike Ethereum, Cardano’s blockchain is being released in stages. Cardano’s staking mechanism was the first major release. Smart contracts will follow, followed by scalability solutions such as sidechains.

This planned launch is advantageous because it enhances the likelihood that the Cardano network will run smoothly. On the other hand, on Ethereum, there are concerns that protocol changes would cause compatibility issues.

Cardano also offers native staking functionality for smaller balances, which is another advantage. You may easily allocate $50 or $100 worth of ADA, for example. Users should be encouraged to stake directly with Cardano rather than through a third party as a result of this.

Finally, Cardano’s staking mechanism may be superior to Ethereum’s. It’s too early to know, and any relevant findings may take a couple of years, but this is at least a possibility. Charles Hoskinson, a co-founder of Cardano, claims that Cardano has the greatest code of any cryptocurrency project. Cardano’s staking process may be superior to Ethereum’s in this situation.

One of Ethereum’s biggest flaws is that it’s difficult to keep up with. We’ve witnessed this personally as Ethereum’s staking update has been repeatedly postponed. Because there are so many projects built on Ethereum, there is a lot of complexity, which raises the chances of something going wrong with an update.

The network may be hacked, cash may be lost, or the new upgrade may just not work! With its intended release schedule, none of these is going to happen on Cardano.

Another downside of Ethereum is that staking necessitates the expenditure of 32 ETH. Buying enough ETH to stake would cost around $40,000 if ETH recovered to its prior all-time high.

Fractional staking will be available through services like Rocket Pool and exchanges. Staking services, on the other hand, have the potential to centralize the network if enough individuals use them. It’s not difficult to foresee a future in which Coinbase is holding 10% or 20% of total ETH. Coinbase may gain undue control over Ethereum as a result of this.

One of Cardano’s major drawbacks is that it lacks the same number of developers as Ethereum. A smaller developer community usually translates to slower growth and fewer new initiatives being produced. While paying engineers to work on a protocol is an option, it might soon become prohibitively expensive.

In addition, Cardano is more centralized than Ethereum. However, when more people join Cardano and begin staking, this could change.

Even while Ethereum is far from flawless, it has been in use for five years and has a massive infrastructure developed around it. In terms of development, Cardano will find it difficult to catch up to Ethereum, especially if Ethereum’s network effect develops exponentially.

Ethereum took the approach of a Silicon Valley startup. Ship an MVP (Minimum Viable Product), gain consumers as quickly as feasible, and iterate on the product over time.

Cardano has taken a methodical approach to development, releasing products only when they are fully polished and functional.

Ethereum currently has a huge lead, which may prove insurmountable. Ethereum, on the other hand, has a flaw: something may go wrong with the coding. There could be issues with staking or one of the other Ethereum updates in the future.

If a serious flaw is discovered, smart contract developers may be compelled to migrate to a different platform, such as Cardano.

It’s too early to know if Ethereum or Cardano will eventually dominate the smart contract market. Right now, Ethereum reigns supreme, while Cardano is still in its infancy, far from being able to really challenge Ethereum’s dominance.